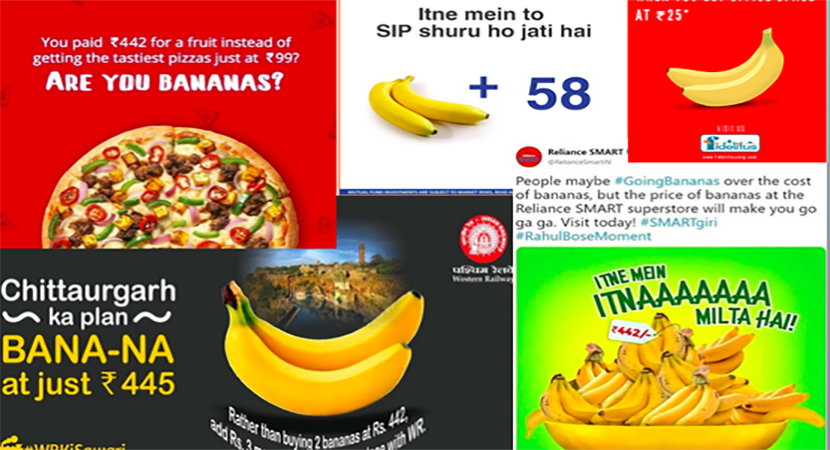 A few weeks back, Twitter was on fire with many tweets sharing the #TheRahulBoseMoment – a controversial play for JW Marriott which certainly it did not expect. What caught my attention is the hotel’s approach to remain silent on the controversy. Is that an advisable approach? Let us take a closer look.

Rahul Bose, a well-known Bollywood actor was staying at JW Marriott, Chandigarh while working on his upcoming project. During his stay, he ordered two bananas while he was working out at the gym. For the fresh fruit that costs around Rs 50 per dozen at the regular market, two bananas at the hotel cost him Rs 442 (including taxes). Rahul was upset and decided to take a dig at them; something that the brand wasn’t expecting or possibly didn’t care about.

The actor shared the incident on Twitter via a video, and soon it was viral. Memes on the episode were being circulated and hashtags like #RahulBoseMoment, #RahulBoseHotelBill, #GoBanana were trending. Twitterati started sharing their experiences when they were over-charged for a product or service. As absurd as it may sound, but this resulted in a debate on price vs value.

The competitors took advantage of the situation, instead of standing up in solidarity. “Don’t slip. For (Rs) 422 you can get a whole room.” said an Oyo Rooms ad showing a banana peel. Taj Mumbai and Park hotel also put messages claiming they serve complimentary bananas and seasonal fruits. Not only this, many other brands rode on the trending hashtag wave and came out with ads and posts with their versions of ‘2 bananas @ Rs. 442′. Amazon Prime, Nature’s Basket, LIC, PepsiCo, Pizza Hut, Reliance Retail, Western Railway, and many others put out spoof ads. All these were certainly not helping the brand!

To add to the trouble, the Excise and taxation department of the state fined the hotel Rs. 25,000 for violation of section 11 of CGST (illegal collection of tax on an exempted item).

The Federation of Hotels and Restaurants in India (FHRAI) cameto the hotel’s rescue and clarified that it didn’t do anything illegal by charging Rs. 442 for two bananas. Both the price and taxes are justified.

This brings me to my start point i.e. how effective is it to adopt a ‘silent stance’ in case of potential crisis. We have seen many individuals and corporates take up this approach and it has worked in their favor sometimes. While in some other cases it backfired too! Actor Aamir Khan and former Axis Bank CEO Shikha Sharma are good examples where adopting a silent stance worked. However, there are cases like Nestle Maggi where remaining non-communicative have cost the brand reputation heavily.

In this ‘always on’ world, we cannot ignore our brand mentions at any time. Yet, should we jump in and issue a statement the minute there is a negative mention? The answer lies in a balanced approach. Brands must continuously keep listening by scanning media coverage, online mentions and engagement levels during such times. If the initial, high-decibel drama is not getting carried forward then lying low and letting the episode settle is a wiser approach. Conversely, if the discussions are continuing for long and the threat to reputation is imminent then a quick action and communication are essential.

Additionally, we need to be mindful of what is the ideal duration to watch before communicating. It has no definite answer. Yet my experience says that if it is a social media lead crisis then the first two-three hours are critical. That will give us an idea of what could be the scale of this crisis and we can plan our response accordingly. On the other hand, if it is print media lead crisis then it is essential to monitor the online media including social media along with other newspapers. If the pick-up in other outlets is not much, then the issue will soon be closed. However, the readiness with a holding statement is a must here. The moment we observe that development is taking shape of a crisis a holding statement must be issued, followed by updates if need be. Another approach can be leveraging influencers to clarify our stance instead of issuing direct statements. This presents an independent perspective and applies a break to the controversies. Possibly in JW Marriott case the FHRAI statement was an outcome of leveraging influencer strategy?